Hampi is known as the ruins of Karnataka, situated in northern Karnataka , it is known for its culture , history and architecture. Some of the temples which are at its ruins and taken over by the UNESCO to preserve them . Lot of tourists visit Hampi to see the remains of the once prosperous Vijayanagara Empire. One of the main attractions of Hampi has always been the Vittala Temple Complex. It is the architectural extravaganza of Hampi. The temple is built with sprawling campus with a compound wall and a gateway towers. There are many more temples, towers, pavilions located inside this campus. Lord Vittala which is another form of Lord Vishnu, who is worshipped in these parts as their deity for cattle. 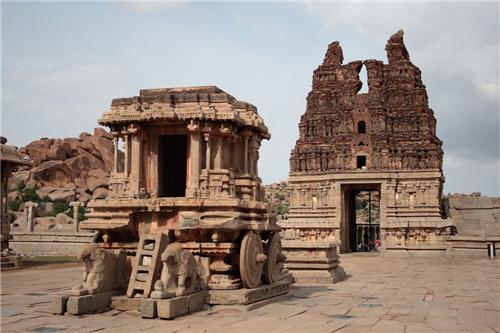 History of the Vittala Temple

The temple was built by the 15th century AD. Many kings who have succeeded after that have enhanced the temple campus during their rule . Some of the ruins are still present in Vittalapura that existed around the temple complex. The highlight of the temple is the impressive pillars. The halls are engraved with lot of sculptures on the giant pillars at the entrance of the temple.

The temple facing to the Stone Chariot, with a series of steps flanged by the elephant balustrades opens up to the open hall in front of the temple called the Maha-Mantapa. There is a dramatic representation of the folklore on the walls, where dwarf elephants are seen fighting with the giant lion Yalis. The Maha-Mantapa has been kept on a high stand which has been carved with floral motifs all around. The lowermost of it is a chain of horses, trainers and traders.

Architecture of the Temple

The Maha-Mantapa has four open halls, of which the south, north and the east is intact. The western hall is collapsed probably during the conquest of the empire. The main attraction of the Maha-mantapa are its nicely carved gigantic pillars. It is said that tapping on these pillars gives a muscial note, thus the name musical pillars. These do not belong to any standard musical notes, but the musical tone of vibes has earned its name. This interests the visitors and are tempted to tapped number of times so tapping of pillars is actually banned so that it can be preserved. 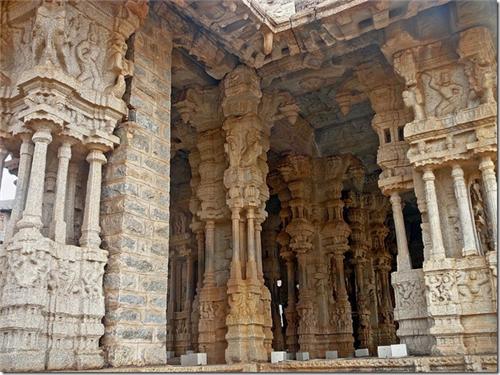 The eastern hall is also called the musicians hall has a lot of sculptures of musicians on the pilplars. Each of there pillars surrounding the hall is filled with the sculptures of dancers, musicians and drummers. The southern hall is filled Yalis, the mythical giant lions. The capitals of each of these pillars are fine specimen of some amazing sculptor work with ornate corbels terminating into lotus buds. The northern hall is surrounded with pillars with Narasimha which is a man-lion incarnation of Vishnu. The most noteworthy is the one where Narshimah is shows slaying Hiranyakashyap and with Prahlada on the other side in a praying posture.

The west is closed with two porches on either side which further leads to the inner sanctum. The ceilings have lotus shaped carvings at the centre just at the inner sanctum where an idol has been carved out. There is a narrow passageway that encircles the inner sanctum. The outer wall can be seen from this passage way which is decorated with Kumbha-Pankajas which is infact the showcase of body with the heads of a bull and en elephant.