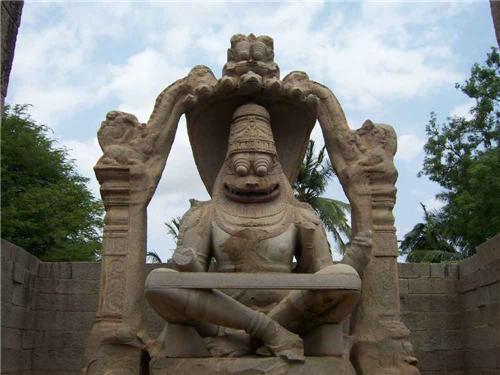 Hampi is great historical temple village in Karnataka. Cited as a World Heritage Site by UNESCO, Hampi was a celebrated town during the Vijaynagar empire, but today lies in ruins. Hampi is a prime tourist spot with monuments in every corner, a delight for historians and enthusiasts. Not just the monuments, but the true essence of Hampi lies in its magnificent temples. One such important temple is the Ugra Narasimha Temple in Hampi. Narasimha is known as a different form of Lord Vishnu in the Hindu mythology. It is supposed to be one of the most popular deities according the early epics, and iconography over the decades.

A half man and half lion is what one can imagine Narasimha as. The deity has a human body with a face of a lion. The deity is known as the great protector and protects his devotees in the times of need and is widely worshiped by a significant group of Vaishnavas.

Due to the nature’s form of Narasimha and his divine anger worship is always given high priority and lot of attention is bestowed on his temples. In all Hindu temples only a lifelong celibate or brahmacharya will be able to perform puja to serve the deity and devotees on a daily basis.

In modern media Narasimha is generally shown either in a yogic posture or with goddess Lakshmi or in a furious look, tearing apart an Asura (demon). The latter depiction is taken from the story when Narasimha’s emerged to protect Prahlad. 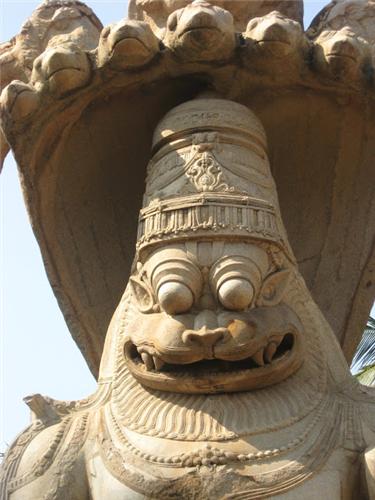 The Ugra Narashima temple is located at the mid way of the main road that connects the Sacred Center to the Royal Center. It is about two hundred meter south of the Krishna Temple, a road that runs crossing the canal to an unpaved path at the right side towards the west that leads to the Narasimha statue. 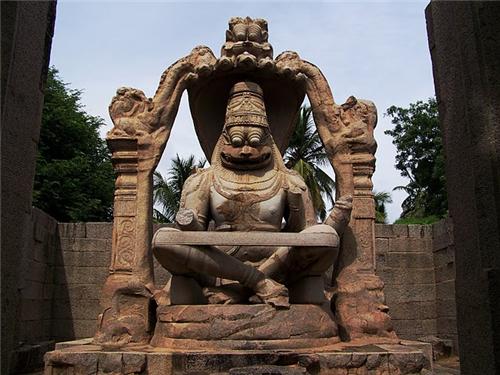 The temple houses the largest statue of any deity in Hampi. Narasimha is shown seated in a cross legged Yogic posture, on the coil of magnanimous snake with seven heads called Sesha. The heads are in an arch forming a hood above Narsimha's head. The reference to Ugra Narasimha is due to his terrifying angry form, protruding eyes and facial expressions are the basis of the name.

The original statue has an image of Goddess Lakshmi, consort of God sitting on his lap. History says, that a lot of foreign invaders raided the Vijayanagar Empire, which had a negative implication on the monuments. The statue of Narsimha faced heavy damages, the part with Goddess Lakshmi faced the brunt too. Today one can see only hand from that portion of statue. This single statue alone demonstrates how creative and destructive a human mind can be.