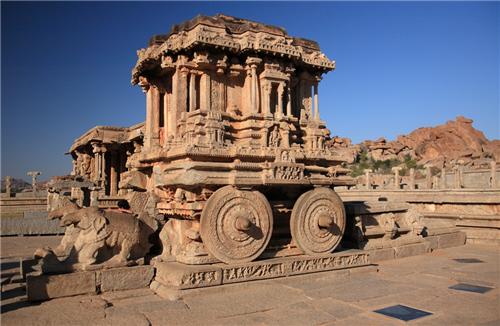 Hampi is a small village in northern Karnataka, taken over by the UNESCO as a World Heritage Centre. There are lot of temples and art related buildings which need to be preserved. One of the must see places in hampi is the Vittala Temple Complex. It is an architectural showpiece of Hampi. The temples are built in a large area with high compound walls and towers surrounding the gates. There are many halls, pavilions, temples located within the compound. The stone chariot is one of the iconic structures of Hampi.

Entrance is from the eastern side of the tower, next to the ticket counter, a series of compact platforms along the central axis of the campus is there. At the end of the campus stands the Stone Chariot. This is a shrine built in the form of a chariot. The image of the Eagle God (Gaurda) was originally created in the inner sanctum. Mythologically, Garuda or the eagle is known to be the transporter of Lord Vishnu.

The shrine looks like a monolithic rock but in actual it is built with many giant rocks. The joints are very smartly covered with carvings and other decorative features that adorn the Stone Chariot. It is a rectangular platform about one feet high and the base of the platform battle scenes from the mythology has been carved out. The chariot might look as if though it is resting on four giant wheels in real it is not putting its weight on, it only acts as a mimic. There are a series of flowers surrounding the wheel.

The painting on the carvings can be still be seen, because it was really protected from the natural wearing elements the under of the chariot spots one of the preserved specimens of the kind of paintings. This is similar to the paintings at the Vittala Temple paintings which has used a kind of mineral as medium.

There are two elephants positioned in front of the chariot as if they were pulling the chariot. The fact is the elephants were bought from elsewhere and placed at a very later stage. In the first two horses were carved and placed in that position to prove this the horses tails and rear legs can still be seen behind these elephant sculptures. A broken stone ladder between the elephants is like the entrance to the inner sanctum. The spot marks on the floor and the doorsill where once the ladder had stood.