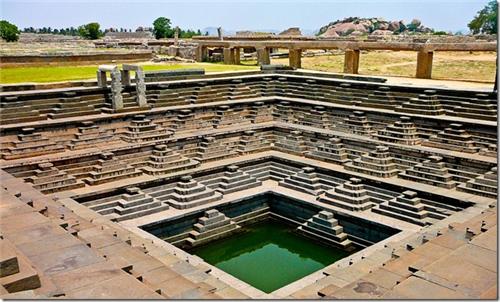 Earlier, temples in India had a water reservoir near by which was used for cleaning purposes like washing down the temple. Some temples even had large stepped tanks and ponds for the devotees to shower their devotion. These water reservoirs were called from different names like tirtha, kalyani, pushkarni, pukhuri, talab, etc. in different languages and regions of India. Some of these tanks are said to be magical and cured diseases once taken a dip. There are a few remains of this kind of which is the Great Bath of Mohanjedaro of the Indian Civilization.
Water has always been a shortage in the various parts of India where dry and monsoon seasons alternate and thus storing of water became important for various kingdoms in India. There were buildings, tanks always being part of Indian architecture. Thus the temple tank design became an art in itself, The art of the stepped tank is geometrically large at the Royal Center at the ruins of the Vijayanagara Empire. The tank is in between the modern town of Hampi, made up of green diorite and has no drain facility. It was filled with what is called as aqueducts. One of the main branches of these aqueduct supplied water to the tank, one such aqueducts which was discovered while digging the ground by the archeologists led to the discovery of the tank.

Architecture of the Tank 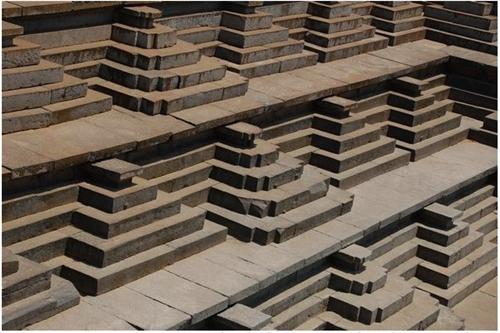 The tank is totally different from other structures of Hampi as the Stepped Tank is constructed using finely finished blocks of black schist stones. All the steps or stones bears some sketches and marks made by the architects. The main purpose of this tank is not known for sure, but was used for religious ceremonies by the royals. These tanks were used for rituals, cleansing and during rites of concretion. The water tanks is considered sacred from the Ganges and even used for immersing of Ganesha idols. Usually these tanks are made near the temples and used to accommodate bathing, cleansing activities before prayers.

One of the beautiful remains of the Durbur area is the tile Stepped Tank which was probably used by the royals for religious purpose. The tank which is around twenty-two square meters and about seven meters deep is small and a neat tank. It has five distinct tiers, each step set in a pleasing pattern. The mason marks on the tank and individual blocks indicates the direction of flow of water. The row and location of the steps reveal that the layout of the tank is stepped and the plan was designed and developed in advance. Each of the black stones of the tank were prepared much in advance as per the requirement and assembled later at the site of construction.

The chain of aqueducts that are used to bring water from Kamalapura Tank that was probably used to fill the wells in the enclosure is evident from the remains. Two most important bathing pavilions of the Royal Center are the Queens bath and the Octagonal Bath are the next architectural structures of Hampi to its credits. Although  Hampi was conquered by the Muslim rulers and defeated to ruins. The ruins were preserved by the UNESCO and taken over as a World Heritage Center.  The stepped tank was discovered much later and preserved for tourists to have  a glimpse and study the lifestyle of Hampi.