Almost all of Karnataka is full of green lush cities, towns and showcases splendid  Kannada culture. Hampi is one such place in Karnataka which is immensely famous for it's historic heritage. Known to be an imminent city during the Vijayanagar empire, Hampi is declared as a world heritage site by the UNESCO.

To review and relive the monuments, specially the ancient Hindu temples, Hampi is the best place to be at. This is major reason why tourists, historians and architecture enthusiasts visit Hampi to unravel the secrets and mysteries of history.

Speaking of temples for which Hampi is highly praised for, one has number of temples to see in Hampi. Sasivekalu Temple is one such fine specimen to be visited. The temple is devoted to Lord Ganesha's form Sasivekalu. A huge statue of the God has been installed in the temple, which is about 2.4 mtrs high. The irony is that Sasivekalu in Kannada means mustard. The statue is shown seated on an open mantap with square pillars all around. The statue is holding an Ankush (broken tusk) in the right hand and looped pasa (noose) in the left. Like all other monuments, statues and temples in Hampi, the Sasivekalu temple has also faced a lot of trouble. 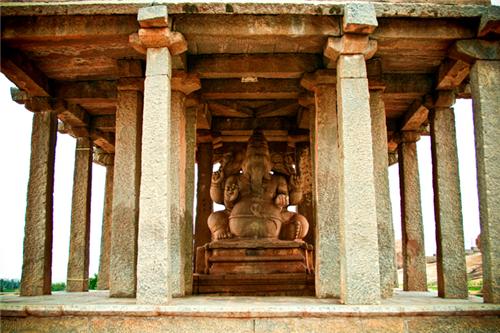 According to the Hindu mythology, Lord Ganesha is quite famous for his quirky habits, including his love for food. A story goes, when he had too much to such an extent that his stomach almost bursted. To stop this, he found a snake and tied it across his belly; the same is depicted in the statue. 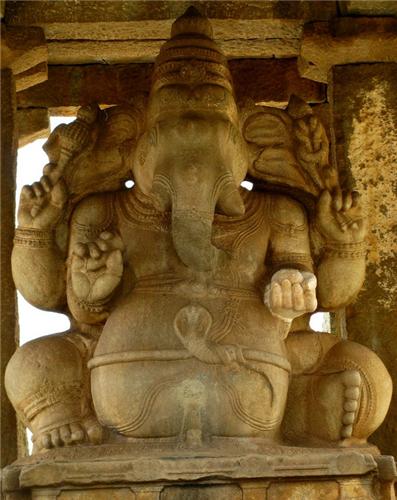 The statue is carved out of a single huge piece of rock and measures about 8 feet in height. There is open pavilion created around the statue. If you look carefully, you can see some inscription on this pavilion, inscribed by the traders  who belong to Andhra Pradesh. The inscription is as old as 1500 AD and says that this statue was built in memory of King Narasimha, the Second, of the Vijayanagar Empire. This temple and statue is indeed one of the finest specimen of Indian sculpting skills.

Moving north to the Sasivekalu Temple, you'll come across another huge statue of Lord Ganesha, known as the Kadalekalu Ganesha; another highly devoured statue in the region. Going towards south, you can find Vishnupada Shrine. All these monuments and temples are located at a walkable distance.