Hampi is a small village in Bellary district in the northern part of Karnataka. Hampi is known for the best architectural buildings and structures. Since in ruins most of them are in ruins, UNESCO has declared it a world heritage site. Some of the best temples in Karnataka can be seen in Hampi, one such structure is the Nandi, the monolithic bull. Locally it is called the Yeduru Basavanna or Nandi, located in the Virupaksha Bazaar, Hampi. The statue is placed on a two storied pavilion built on an elevated platform. This structure is partially damaged or destroyed and for its coarse style carving it attracts a lot of visitors 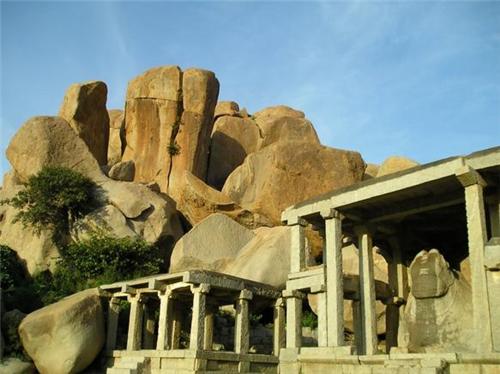 Nandi or monolithic bull is said to be the mount of Lord Shiva and it is symbolic because it faces the Lord Shiva shrine, Virupaksha Temple located opposite end of the street, about a kilometer from it. A little distance from the Nandi, one can spot a tall stone lamp post with metal spikes over it. According to Hindu mythology Nandi was born as a result of sheer devotion and penance shown by sage Shilada, towards Lord Indra. The sage wanted an immortal child, and only Lord Shiva could grant that wish. So as advised by Lord Indra, Shilada started his worship. The worship continued for centuries, but Shilada didn't moved an inch. His condition worsened to such an extent that termites began eating up his body. Seeing this, Lord Shiva appeared, and out of his bones created Nandi, the immortal child. The Lord also restored Shilada. The epic says that it was Nandi who cursed the demon Ravana that his kingdom will be burnt to ashes by the Vanara or monkey clan. 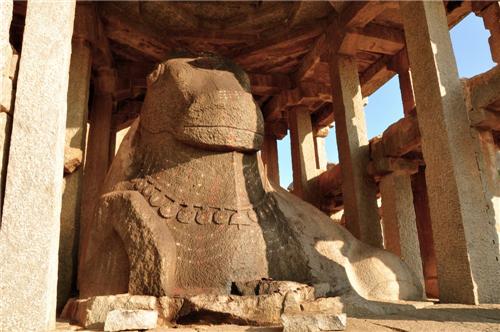 Things for tourists to see

The big boulders behind the monolithic bull add to the beauty of the place. Since the sculpture of Nandi faces the Virupaksha Temple that is dedicated to Lord Shiva, tourists can see a stone lamp with spikes located near the monolith. The Lord Shiva's ride stands in a sheltered pavilion with big boulders and is believed to be the guard and protector of the city of Hampi. The structure is admired for its large size, the bull statue has very basic carvings and has stood the trials of time and damage over the years.

In between the monolithic bull and Virupaksha temple, is the Hampi Bazaar which has been there since the Vijayanagara Empire. The steps beside the monolithic bull takes visitors to the Achyutaraya Temple which is on the other side of the hill. One can also go to the Vittala temple after reaching here. Another way towards the right from Nandi leads to the Matanga Hill. The boulders behind the Nandi gives a scenic beauty and is a real treat for tourists in Hampi.