Zenana enclosure was a secluded area reserved for the royal women. Zenana Enclosure in general would refer to the Queen's enclosure along with the servant's quarters around and private temples. This walled harem houses many interesting highlights. The major attraction is the Lotus Mahal located at the southeast corner. The style of it is a pleasant departure from the typical architecture you see in Hampi. The exact function of this is not surely known.

Located inside the Zenana enclosure, most probably this was a socializing area for the women folks in the royal family. Also known as Chitragani Mahal and Kamal Mahal, this falls under the secular or nonreligious categories of structures in Hampi. It’s peculiar to note that this is one of the beautiful structures that were left undamaged during the siege of the city. However there are some signs of mutilations on a few sculptures placed on the outer surface. 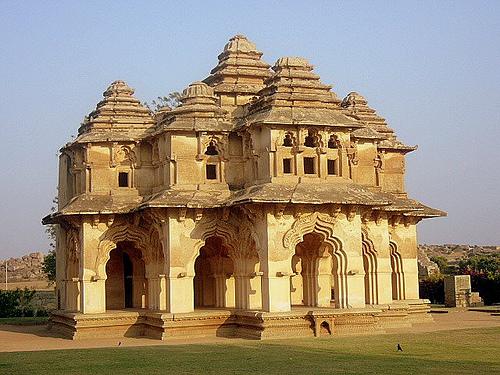 Unlike the other major structures in Hampi, this is made out of lime mortar and brick composition.Surrounded by walls and four watch towers in each corner, Lotus Mahal's base begins with traditional Vijaynagara architectural pattern but as your gaze moves upward to its superstructure, you will find atypical pyramidal towers that more representative of Islamic architecture. Bearing a decrepit and damp appearance, exquisite carvings of artistic patterns, birds, etc can be seen on the Palace's walls while on some of the arches you can make out the carvings of Makara Torana, a popular sea creature from Hindu mythology, also the vehicle of Goddess Ganga.

Yet another fascinating aspect of this two storied elegant pavilion replete with massive pillars and exquisite stucco moldings, are the traces of pipelines that can be spotted between the arches and sides of the roof, possibly used to cool the Palace and maintain its temperature. The shape of the structure is what brought it the name. The archways and the balcony with the domed construction resemble a half opened lotus bud. Also is the lotus bud shape carved on to the center dome.

This  two storied structure in Karnataka has an open base floor the sidewalls are having tall arched windows. The upper floors have balconies with arched windows. Hook like structures are made on to the wall close to the windows to hang curtain. The arches of the ground floor are recessed and ornate. The decorations and architecture is a curious mix of Hindu and Islamic styles. Lotus Mahal’s Islamic style arches and the Hindu style multiplayer roof and base structure are often quoted for the ingenuity of the Vijayanagara artisans. 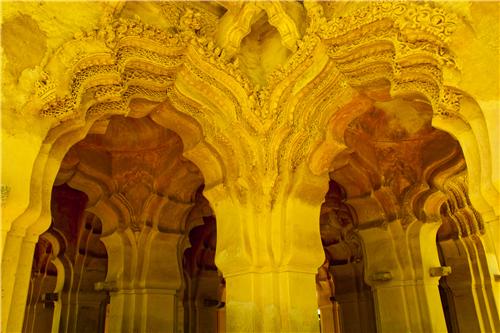 The night illumination is a spectacular sight. It is also believed that the Mahal or Palace was air-cooled and maintained its temperature during summer. The proof of this can be seen in the pipeline work above and between the arches. Undoubtedly this is a very photogenic and one of the most photographed buildings at Hampi. There is a large lawn made around the Lotus Mahal. 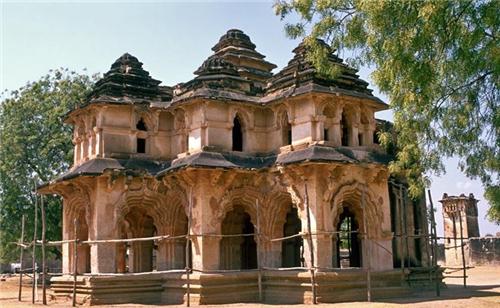