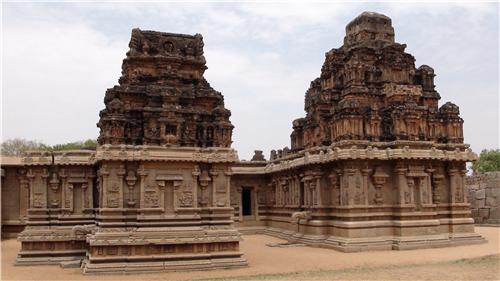 Hampi  is a known as one of the best tourist destinations in Karnataka. It is a small village in Bellary District, which was called as the Vijayanagara Empire. After the Muslim rulers conquered and defeated the rulers of Vijayanagara, the Empire came to ruins . In 1813 A.D. the UNESCO took over the responsibility to preserve and restore some of the remaining structures and temples of Hampi and declared it a World Heritage Site.

Hampi is known for the best various temple structures, monuments and palaces built in various architecture. One of the well known temples in the middle of the Royal Center is the Hazara Rama Temple.

Surroundings and Architecture of the Hazara Ram Temple

The big sprawling lawn located at the north of this temple marks the landmark for a new person. The path that connects the Royal Enclosure and Zenena Enclosure passes along this temple courtyard. Another path is from Danaik’s Enclosure and Shiva Underground which joins at the northeast cornet of the Hazare Rama Temple. Thus any tourist who visits Hampi and goes to visit any important location will come across this temple in any way or the other. The north east part of the temple takes you to Beatle Nut Bazaar , and walk through the packed and shattered structures and shrines which once were part of the decoration of this temple. The walk further leads you to Ranga Temple and the Pattanada Yellamma Temple.

Hazara Rama temple is a religious monument was used as a private temple for the king and his private family members. The relationship between the monument and royalty is expressed in the reliefs covering the outer surface of the outer compound walls and which the temple itself stands. They portray pictures of the elephants, horses with attendants, military contingents and few artists and dancing women exactly how is noticed in the Mahanavami festival 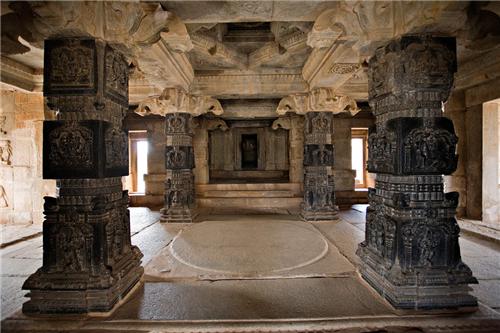 Hazara Rama Temple means a thousand Rama, is the only temple in Hampi with its external walls decorated with bas-relief structures or art work. According to the drawings on the temples walls, it can be concluded that the temple was built by Devaraya I in the early 15th century, as a worship place of Lord Rama under the name of Ramachandra. His love and respect for Lord Rama is clearly visible through the wall paintings depicting Lord Rama and his stories. This form of art is discovered to be the most extensive series of art work by the Vijayanagara artists.

The Hazare Rama Temple is approached by an open mandapa which was probably an addition to the structure in the 16th century, which leads to the original entrance which has carved columns. Except for the four columns which have been heavily ornamented, the interir part of temples is left bare. There is an empty podium that stands inside the sanctuary, and can be seen with three holes on it, this could be the place where the idols of Lord Rama, Sita and Lakshman would have been. 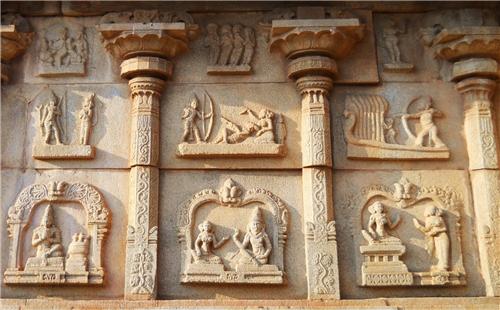 The walls of the temple are raised from the basement with a fine set of worked moldings and overhung carvings. A smaller shine is also built in the similar manner with beautiful wall carvings. It has two sanctuaries with the story of incarnation of Lord Vishnu on the walls , so perhaps it was worshiped by Lord Narasimha. To the east of the temple again is a small shrine with perhaps the Hanuman or Garuda with a damages lamp column standing in front. A road from here is lined with shrines or structures of different deities which proceeds through the Royal Centre, which finally exits the fortified zone and leads to the river crossing to Anegondi.