Though Karnataka is not a coastal state in India, Hampi being a small town is generally hot. In summers which extends from March to June, the temperatures could reach above 400C. Monsoon stretches from June to early August. Rains can actually  hinder one's local Hampi tour, because most of the places to visit are in open areas and walking itself will be difficult. It is possible to visit Hampi all through the year except the very hot or rainy days. With dust settled and river to its full and fresh greenery and ruins with a good wash; is a treat for the tourist.

The river flowing across Hampi is the Tungabhadra River, which is an important river in the southern region of the subcontinent. Hampi is located in the path of the river on the south banks, which takes lot of turns and twists along the rocky terrain. The river plays an important role in the religious and political  history of the Hampi. Tungabhadra is the merging of two rivers Tunga and Bhadra and hence the name is come. It flows in the northwest direction and joins the eastern river Krishna, which finally ends into the Bay of Bengal. A huge dam and hydroelectric project is constructed across the Tungabhadra river cutting down its vigor and force of flow in this area. 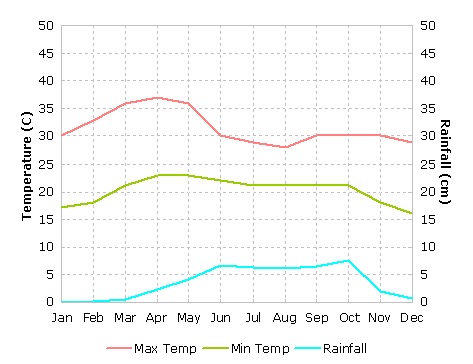 chart showing weather conditions of Hampi
Hampi is located on the banks of the Tungabhadra river in Karnataka. The chief occupation is agriculture, and the main source of revenue is tourism. The region is also well known for its mineral content and deposits, mainly iron-ore and manganese. Agriculture thrives because of Hampi red soil. Mining rich deposits of iron-ore and manganese provides work and brings money to the region. Excessive minerals in the district leads to mining in Hampi as a major industry. Mining which is not monitored and excessively done endangers the Tungabhadra Dam and World Heritage Site monuments. The government of Karnataka needs to keep a check on the use of natural resources in Hampi. 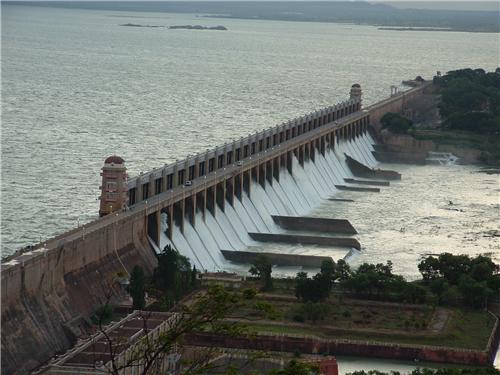