Hampi is a small village in Northern Karnataka, was the last capital of the great Hindu kingdom of Vijayanagar.  It had very wealthy kings and princes who built lot of temples and palaces built in the Dravidian style which won a lot of admiration of travelers in the middle ages. The Deccan Muslim Confederacy conquered the city in the 15th century, the city was ravaged for more than six months before it was abandoned and went to the ruins. 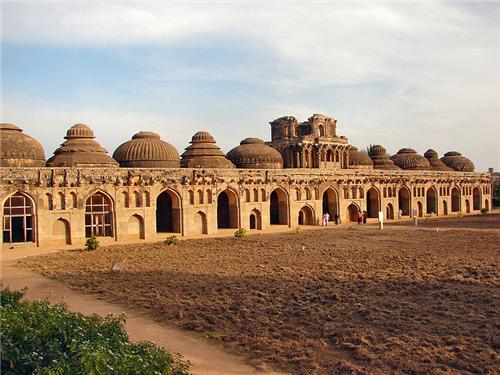 One of the last few structures which were destroyed in Hampi were the Elephant Stable, which is a major tourist attraction. This is a long structure with a row of domed chambers which were used to keep royal elephants. There are in all 11 doomed chambers of which some are inter connected. The center chamber is specially decorated and quite huge. Probably the musicians and associated band troupes had been using this during ceremonies involved in the processions of elephants.

The building as such looks symmetrical with respect to the central hall. The tower of the central hall looks like the temple shrines though most of it is destroyed. The five pair of domes which have remained intact are of the Islamic style they are better preserved. Metal hooks which are used to tie the elephants on the inside roof can be seen. At the rear of each hall are small manholes type openings for the mahouts to enter the elephant  compartments. Elephant Stables can be reached through the Zenana Enclosure, proceed to the Guard’s Quarters and move to the Ranga Temple located  a bit south of it all. 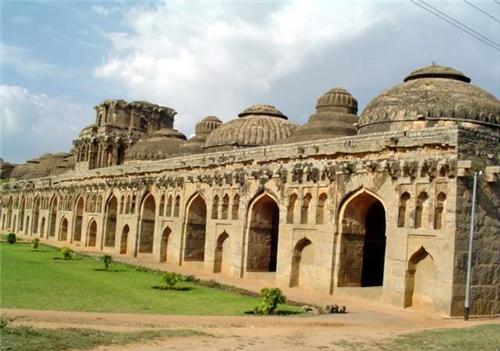 Multiple Use of Place

The Elephant Stable is a wonderful example of Indo-Islamic architecture  made from brick and mortar. The building is of great heights covered individually by the domes of various shapes and a building near it to lodge the workers. Together they form a “L” shaped structure, which is a part of the parade for ceremonies. During the best and high times of Vijayanagar Empire had about 10,000 elephants of which only 10 of them were chosen for royal service and kept in the stables. They are the best among the animals. 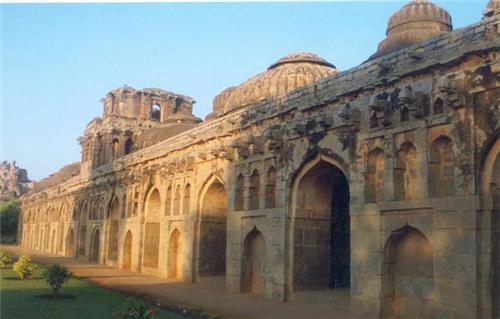 A set of large stables are part of the ceremonial royal elephants of the royal household. The area in front of them was a parade ground for the elephants and troops. This is another structure that portrays the Islamic style of building. The guards barracks are located next to the elephant stables. Elephant stables are on the east of the famous Lotus Mahal. Each of the dome has a large chamber with a painted ceiling. The interiors are left-right symmetrical from the central entrance. Elephants have always been  termed as royal animals used by the kings and princes to fight and show on as wealth and assets of the kingdom. In Vijayanagar Empire the rich and wealthy were in good number, to take care of their elephants they needed a proper place, which was suffixed by the elephant stables.