Hampi is a small village in northern Karnataka , It is a well known World Heritage centre. Hospet is the closest town near Hampi in Bellary district. Daroji Sloth Bear Sanctuary is situated only 15 kilometers from Hampi. This is the only animal sanctuary in north Karnataka. Although the sanctuary is relatively new which began in 1994, it has proved to be a suitable habitat for the Indian Sloth Bears in a few years. The Indian Sloth Bears had made home the rock bedded hillocks that run between the Daroji of Sandur taluk and Hospet Ramasagar Taluk in Bellary district. In October 1994, the Karnatka Government declared those few hectares of land in Bilikallu reserve forest as Daroji Bear Sanctuary. 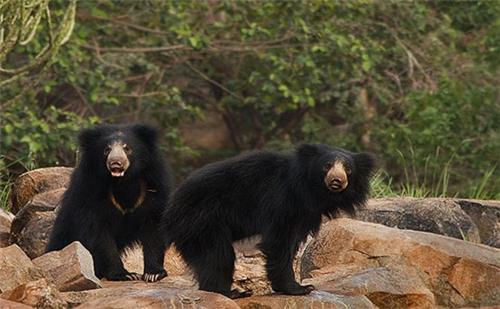 Geographically located between 150 latitude and 760 longitude . However when the wildlife estate was created, the forest had nothing except for barren hillocks filled with thorny trees. With the help of forest staff, department staff and nearby villagers the sanctuary has been transformed into lush green area boasting of a verdant forest and local species of flora and fauna.

By Rail: Nearest railway station is Hospet where trains from Bangalore and Hubli are accessible

There are eight kinds of Bears in the world. Indian Sloth Bear is confined to India and Sri Lanka only. Its scientific name is Melursus ursimus. It has a long , dark coat with a characteristic V shaped mark on its chest. Their fore limbs are longer than their hind limbs and their hairless feet are armed with 3 inches of sharp, curved claws with hairless webs uniting their paded fingertips. Their head is comparatively larger than other in the bear family with smaller ears and weak eyes; thus the sense of sight and sound is weak. But, they have outstanding sense of smell.

Their loose jaws and lips with out incisor teeth allow them to suck insects like termites and ants out of earth. The adult bear attain a length of about six feet and three feet at shoulder. Male bears weigh about 140kg and females about 75kgs, Summer is their mating period often accompanied by quarreling. Usually two or three cubs are born by winter and the new borns are blind for three weeks. The mother takes care for three years. The life span is around 40 to 50 years. The sloth bears are nocturnal animals.

The bears relish on termites and honey it rip opens the termite mound with its claws, pokes its nose under ground and blows away the din and debris away. Then it enjoys the termites by sucking them , so noisy the process can be heard 300 yard away. They are crazy over honey. They climb trees to obtain and are not attacked by the bees. They also eat fleshy flowers and thus help in spreading their tribe. The Bears alsp eat seeds of forest fruits and are distributed in the form of stool throughout the forest. They are good tree climbers too and good swimmers. 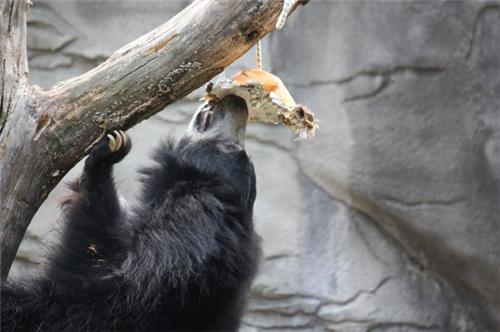 The Sloth Bears are not aggressive and usually run away when they get the smell of human beings, but they get so much absorbed in what they are doing that they hardly notice the man approaching them until a sudden encounter.

The sanctuary can be visited between 6:00 am to 6:00 pm on all days. To watch the Bears one must be in a watch tower on a hillock and maintain silence. The hillock has hundreds of caves where the Bears take shelter. 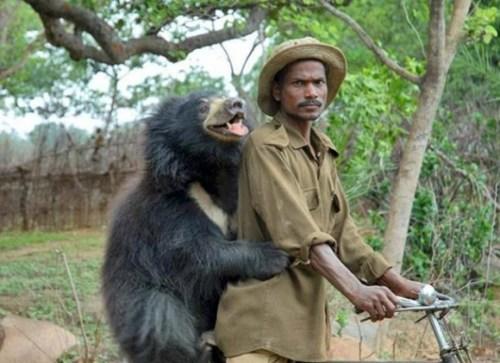