Hampi is a small village in Northern Karnataka, come to ruins and taken as a World Heritage Site. Hampi is a well known tourist center with lot of temples and good sculptor work. Achyuta Raya temple is one of the famous temples in Hampi. It was builst in 1534 A.D., this temple is an example of Vijayanagara style of architecture in the most advanced forms than any other temples in Hampi. This temple was one of the last grandiose temple projects executed before the fall of the empire.

The temple is dedicated to Lord Tiruvengalanatha form of Vishnu, it was constructed by a high officer in King  Achyuta Raya's court  and hence his name for the temple. The temple complex and the market which is in ruins sits in a semi made valley by the two hills the Gandhamadana and Matanga Hills. The two main ways to reach the temple are, one from the Kodanda Rama Temple or Kings Palace path which enters the Couteseans street and leads to the main tower of the Achyuta Raya Temple. Another route to the temple is to climb the steps near the Nandi (Bull) at the east of Hampi Bazaar, this is the easier and faster way to the temple. 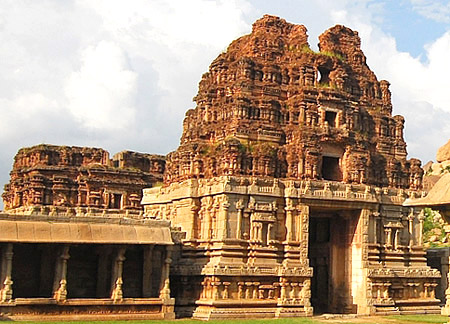 History of the Temple

Achyuta Deva Raya (1529-1542) was a king from the Vijayanagar kingdom of South India. Younger to King Krishna Deva Raya whom he succeeded in 1529, he was known as a lover of literary works and music, he patronized the Chatu Vittalanatha (talented Kannada Poet), the great composer Purandaradasa and the Rajanatha Dindima (the great Sanskrit scholar). Although when Achyuta Raya became a king it was not an easy task for him, peace and prosperity of the happy days of Krishna Deva Raya rule was coming to an end. Feudations and enemies were waiting for an opportunity to bring the kingdom down.

Some of Nuniz works speak of Achyuta Raya as being a king given to vices and cruelty, there is enough evidence to prove he is a noteworthy and noble king and fought hard to keep up the prosperity and legacy of the kingdom alive. Two noted books were written about the kings life they are Achyutabhyudayam and Varadambikaparinavam to describe the kings life in detail. 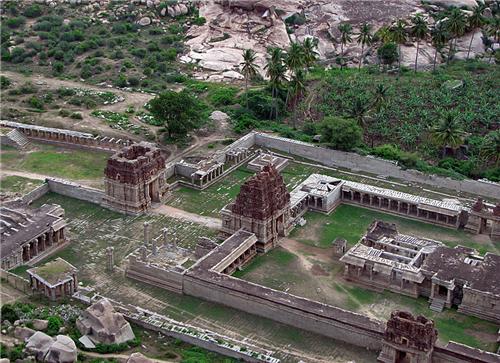 Architecture of the Temple

Between two rectangular concentric courtyards is the main shrine located. The inner wall of the courtyard are lined with pillared verandah. The outside pillars are mostly in ruins where pillars are almost scattered along the walls. Two ruined towers welcomes one into the temple courtyard. If you move in straight through the entrance you go into the inner court and spot a chamber facing the porch to the central hall. The tiny shrine was once an idol of Garuda the eagle god and mount the principle diety. The open hall leads to one of the finest pillars which spots the lion faced Yalis standing on elephants. The arms soldiers riding the Yalis holding on to the beast mouth is seen. The whole thing is carved on a monolithic block of rocks. Two guard diety stand at the entrance of the inner sanctum. The inner place is circular and dark and empty to view.

The twin chambered shrine of the goddess is towards the west of the main shrine, Carvings in the pillars of the hall reveal themes like Lord Krishna playing the flute, calves enjoying the music, Lord Vishnu blesses an elephant, Krishna dances holding on to a snake. At the end of the compound is a Kalyana mantapa. A water channel is seen flowing along the compound. The tiny exit at the end of the compound leads to a boulder where ten handed fierce goddesses image is carved on a rock, which further leads the way to the Matanga Hill top.